the wonderful world of veena.

this one time, i made thanksgiving dinner.

Last Thursday, I was somehow trusted with feeding my family for Thanksgiving. My parents were out of town and flew back only on Thursday afternoon, and since it was the first time I'm been in the States for Thanksgiving since 2006, I wanted to make sure I got my traditional Thanksgiving dinner: chicken biryani.

So since my mother wasn't around to wave her magic wand, the task fell to me to feed everyone. I looked through a few recipes online and watched a few videos to get some ideas for how I wanted to make it - eventually I chose one to use as my main guide and tweaked it a little to make it my own.

What follows below are pictures of my endeavor along with the steps I took to get there. Hope you enjoy! 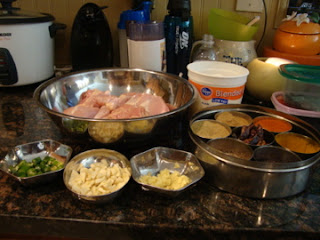 Above you have all the ingredients for the chicken marinade:


Add all of these ingredients to the chicken, mix it up nicely, and let it marinate for an hour.

After this, I washed the rice and soaked it in water for half an hour.
Meanwhile, I chopped some onions and tomatoes. Technically the recipe called for sliced onions, but I don't like slicing onions. Call me crazy.

At this point, I put some oil into a huge pot and heated it up with some cloves, cardamon, bay leaves, and some of those chopped onions. Once those started getting a bit brown, I added the tomatoes and then eventually the chicken. 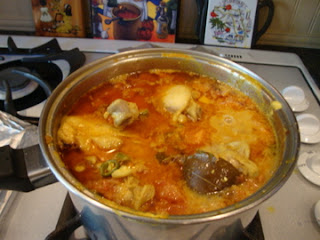 I brought this to a boil and then reduced the heat to low and let it cook slowly, stirring every 5 minutes or so. 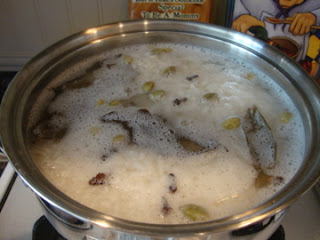 While that was stewing, I filled another large cooker with water, and heated it with some bay leaves, cardamon, and cloves. I then added the rice [after draining it from the water in which it had been soaked], brought that to a boil, and then reduced the heat and let it simmer.

I cooked both of these until they were thisclose to being done - essentially almost all the way, but not quite.

Then I fried the last of the chopped onions in some hot oil to use for the layers. 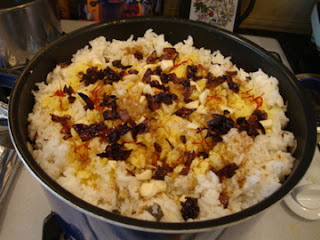 I then put the lid on, put the pot on a griddle plate [to keep it from getting direct heat], and heated it on low for about 15-20 minutes.

This was the finished product, after being mixed: 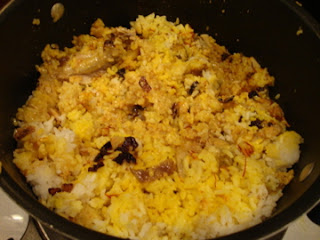 Next on my list: the ins and outs of tandoori / butter chicken.
woo pig.
xx
Posted by Unknown at 21:05

the blogs of strangers.